This is a financial blog, so why the food talk?  Well, for those that don't know, I was once sued for 35 million smackeroos, and one of the reasons was for talking about food in a chat room I was running.  I now always take the time to talk about food whenever possible.

Full Disclosure:  I know Ron Brown, the owner of Barboncino for over 10 years.  That being said, this review is honest and unbiased.

I decided to finally visit Barboncino after threatening to go for a few months.  Despite $25 in bridge tolls (absolutely ridiculous) to get from Joisey to Brooklyn, I took the chance that the food was going to be that good to offset it.  I brought two of my best friends, Andrew and Joe and headed out.

I was told by my brother in law that the neighborhood was not a good one, and Joe was given the same warning by his brother.  It's certainly not Park Avenue, but its up and coming and we didn't feel at risk, and Joe didn't mind parking his Infiniti on the street. The street was pretty active with people.

As we entered, the first person I recognized was Ron's wife Jane, who is one of my favorite people, despite not seeing her in probably10 years. Joe and Andrew quickly fell in love with her, as she is one of the sweetest people in existence and has a purely genuine nature about her.  Joe was (rightfully so) bragging about his kids and his wife's amazing cake creations by showing pictures from his iPhone and Jane was truly blown away.  His favorite comment from her, after seeing Joe's wedding picture was "wow you look really cute when you are thin".  Classic!  Since Jane was born just outside of Philadelphia, Andrew immediately went to work, as he is a Philadelphian by transplant.

I caught up with Ron and Jane for a bit, and then we went to work dissecting the restaurant.  Why here? What was it before this? Aren't you a filmmaker?  Why a pizza shop?  Are you a chef?  He was just hit from every angle and answered everything in stride.

Ron walked the streets of Brooklyn for 11 months looking for the perfect location.  Since he lives in Manhattan, why Brooklyn?  He feels that Brooklyn is the best place for the "little guy" small business owner to flourish since real estate is more affordable.   He had a "before" picture of the space and it was your typical disaster.  He said that you could see right into the bathroom in the apartment above. Ron GCed the entire job with day workers, and the care that went into the design can be seen through every inch.  The bar is gorgeous and the dining area is inviting and more roomy that it first looked.

Ron is a film maker but has owned 6 food service related businesses.  All the recipes are his.  Joe immediately recognized the oven as a Ferraro and went into a heated (pun intended) conversation about how great they are.  Ron says it cooks a pizza in 90 seconds.  He then went on to talk about how his dough takes 3 days to rise, and the quality he uses and how this is a true Neapolitan style of pizza.  Whatever, it just looked awesome. 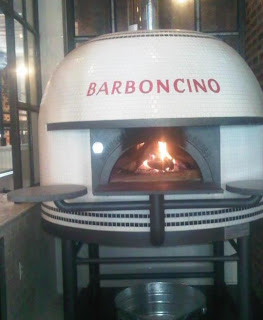 Having seen pictures, I knew the pies were more of the personal size, and since all three of us are big eaters (not really Joe, but he has BIG EYES) we were anticipating ordering 6 pies, and appetizers. We didn't quite get there.  After talking and waiting for a table to open, we were there smelling the deliciousness for about and hour and were starving.  We finally sat down just before 10PM.  By the way, they serve food until 1AM.

We started with the meatballs, the salumi board and the roasted peppers with Buratta.  Here we go, food time!

The meatballs were very good.  Andrew and Joe felt they were excellent, but I think my wife and mother in law make the best meatballs, so I'm extremely biased.  I felt they were very good, and would absolutely get them again.  The salumi board was good, but the highlight for us was the pizza pane they serve with it.  I have the luxury of being near one of the best Italian Salumerias in New Jersey, so the meats were not impressive to me, because I've had as good quality meat many times.  I'm not knocking the dish, but there's a limit you can get to with mortadella and it's cousins. It was high quality, and gobbled up almost before it hit the table.

The highlight of the appetizer selection for me was the fire roasted peppers and Buratta. OH! MY! GOODNESS!  The peppers were ridiculous and the Buratta cheese was so good, I immediately ordered more as soon as I tasted it, because I knew it wouldn't be enough. Andrew said it tasted like a combined ricotta and mozzarella and that is a perfect description.  I couldn't stop talking about it, and still can't.  They don't make the cheese there, but buy it super fresh locally and you can tell.

We ordered three pies to start.  The clam pie was a must, then we decided on the mushroom and sausage (white pie) and a red pie for the third, so we choose the magherita. We hit the magherita first.

Ron had told me that despite the oven cooking at 900+ degrees, the pie would come out a little soft.  If I liked it crispier he said, I could ask for it that way and they would accommodate me.  I decided to try out the pie the way they make it.

I'm a bread guy, so I don't mind the crust being on the soft side, but it was the one issue that Andrew had with the pizza.  He thought the toppings and overall flavor was amazing, but likes his crust crispy.  So do I, but as I said, I didn't mind it.

I felt the magherita was very tasty, but I like more cheese on my pizza, I'm not a sauce first kind of guy.  Joe and Andrew (crispiness issue notwithstanding) thought it was delicious.

The clam pie was yet to come, so we dove into the mushroom and sausage pie.  Joe loved this pie, mainly because it wasn't overwhelmed with mushrooms.  We frequent another pizzeria, and love it, but they pile on the mushrooms on their mushroom pie and it makes it soggy.  This pie was nothing like that, and was outstanding in taste and texture. We all loved it.

They serve the clam pie with a lemon squeezed on top, but I was having none of that, so I grabbed the waiter after I ordered it and averted a disaster.  I'm sure for those that enjoy lemon, it would be a nice touch, but since I don't, I wasn't taking any chances.  How was the pie?  Well, I'll put it this way, after one bite, it became one of the top three pies I'd ever had.  The combination of the clams with the cheese and  parsley butter made the pizza a truly amazing experience.  I ordered one to go but my wife didn't want it by the time I got home, so we ate it today at 9AM.  It was a reheat (but we do have a pizza stone in the oven) and she still loved it.  I liked it, but was spoiled since I had it fresh the night before.

We quit at 3 pies (wimps!) but did decide on some gelato for dessert.  They have 6 flavors to choose from: Vanilla, Hazelnut, Espresso, Dark Chocolate, Pistachio, and the one with three milk that I cant pronounce or currently find on Google..  I got pistachio, which even though Ron said wasn't his favorite I couldn't resist, Joe got the three milk one and Andrew got the waiter's suggestion:  One scoop vanilla, one chocolate and one the three milk flavor.  They both suggested that we add some sea salt onto the three milk flavor and while I only had 2 spoonfuls of Joe's gelato, the salt made an amazing difference on the second spoonful.  I had a cappuccino and Joe had a double espresso but was warned that it was very strong.  He was not disappointed.

Our waiter was attentive and pleasant and answered all our inquires with honest responses.  I purposely watched the other wait staff and bartenders, and everyone seemed pleasant and helping.  This is often times taken for granted, but there is nothing that will ruin your meal quicker than a waiter or waitress that is pompous, or worse, a jerk.

As far as price goes, I thought it was going to be a bit on the expensive side, but all in, it was actually affordable, and no one thought for what we got it was at all expensive.  We were full and satisfied and got out for less than we expected to pay for a meal in (the slight outskirts of) NYC.

Ron told us that he had sunk every dime he had and could borrow into this venture, and the quality and care put into each and every detail is a true testament to what having your back against the wall can lead you to accomplish.  You can see it, and more importantly taste it in every single bite.  Don't miss the chance to dine here if you have the opportunity.

$32 in tolls to get there for me ($25 was just the bridges)
Not big enough so......
Prepare to wait during prime time Thur-Sun (just grab a cocktail if that's what you do!)
It's too dark to read the menu (get the flashlight app for the iphone)

Blog's To Check Out

There will be times on this blog when I recommend or endorse a product or service. This endorsement or recommendation may be expressed or implied. Please understand that I may get paid an affiliate commission if you click on a link, advertisement, or are referred to a site by me.

Perform your own due diligence before making a purchase based on my, or anyone's recommendation or endorsement

If you ever have any questions or concerns, feel free to contact me at tinymjs at gmail dot com